Was Your Ancestor a Shipbuilder on the Clyde?

At its height, the shipbuilding industry along the Clyde employed tens of thousands of workers who made some of the world’s fastest, biggest and most beautiful ships. In addition to this tens of thousands more were employed in the supporting industries in Lanarkshire. The industries of coal mining, ironworks and steelworks.
With the Industrial Revolution (1760-1840), came steam engines creating faster transport across the seas.  As a result, shipbuilding replaced trade as the major form of commerce along the Clyde river and shipbuilding companies soon dotted its banks. Arguably the largest of these companies was the Fairfield Shipping Company in Govan.  In addition to the Empress line (Empress of Ireland, Empress of Britain, Empress of Japan, Empress of Asia and Empress of China), Fairfield was one of the leading suppliers to the Royal Navy. 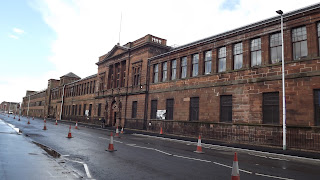 As a result of the numbers of shipyards and the quality of the vessels, Glasgow became a world leader in shipbuilding. "Clyde built" soon became the standard of quality.
If your ancestor worked in the Shipbuilding industry on the Clyde, you may wish to have a look at some of the archival records. These records include plans, photographs, minutes and cost books for the shipyards. Few personnel records have survived. The records are housed at the Glasgow Archives in the Mitchell Library and at the Glasgow University Archives.
Shipbuilding records are at the Glasgow Archives: http://www.glasgowlife.org.uk/libraries/the-mitchell-library/archives/collections/shipbuilding-archives/Pages/default.aspx
Shipbuilding records are at Glasgow University Archives: http://www.gla.ac.uk/media/media_60314_en.pdf
Iron, Steel and Coal mining company records for Lanarkshire, are at the Glasgow University Archives:
http://www.gla.ac.uk/media/media_60311_en.pdf
Any company magazines of the various shipbuilding companies are available at the National Library of Scotland. These often include promotions, deaths, celebrations and photos of company gatherings.
Posted by Christine Woodcock at 09:49