Following the building of the Canadian Pacific Railway in 1885, the lands in the western part of Canada opened for settlement. The Canada North-West Land Company, incorporated in 1882, provided 11 settlements in the provinces of Assiniboia (Manitoba) and Alberta, 30 miles apart from each other and extending along the CPR lines at the foot of the Rockies.  The settlements each comprised 10,000 acres. 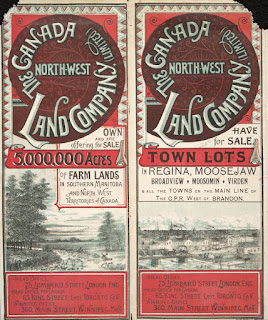 Unlike the settlement grants in the Maritimes, Quebec and Ontario, the grants in the west came fully stocked. While the grants in the east came with uncleared land, the grants in the west were “systematically” settled. The Canadian Agricultural, Coal and Colonization Company’s plans show this quite clearly.
In the centre of each settlement, 640 acres were to be dedicated to the “village” including shops, a school and a church.  The outlying areas were to be divided into 1000 acre lots which were to be completely fenced, and were to come equipped with:
Each settlement area (village) was to share ploughs, wagons and rakes.
Each farmer paid £100 and was loaned £192 by the settlement company.
The primary purpose in setting these settlements up was to prevent isolation of any one family, having people emigrate with family or neighbours from their community and placing them together. On the new settlements, they were surrounded by people they knew and were able to carry on the traditions and customs of their lives in Scotland.
The purpose in having the farms fully equipped was to alleviate the hardships of the earlier settlement schemes and provide the farmer with a fully equipped and revenue bearing farm whereby he could begin to repay his loan that much sooner and be ready to own his own land that much faster.
Maps and land grants for the Canada Northwest Land Company are on microfilm and held by the Glenbow Archives:
http://www.glenbow.org/collections/search/findingAids/archhtm/cnwl.cfm
Some of the documents have been scanned and digitized and made available on the Internet Archives:
https://archive.org/search.php?query=%22Canada%20North%20West%20Land%20Co%22
Posted by Christine Woodcock at 09:00