At the Battle of Bothwell Bridge in 1679, over 1200 covenanters were taken prisoner and taken to . Approximately 400 of these prisoners were held in the Covenanters Prison in Greyfriars Churchyard. 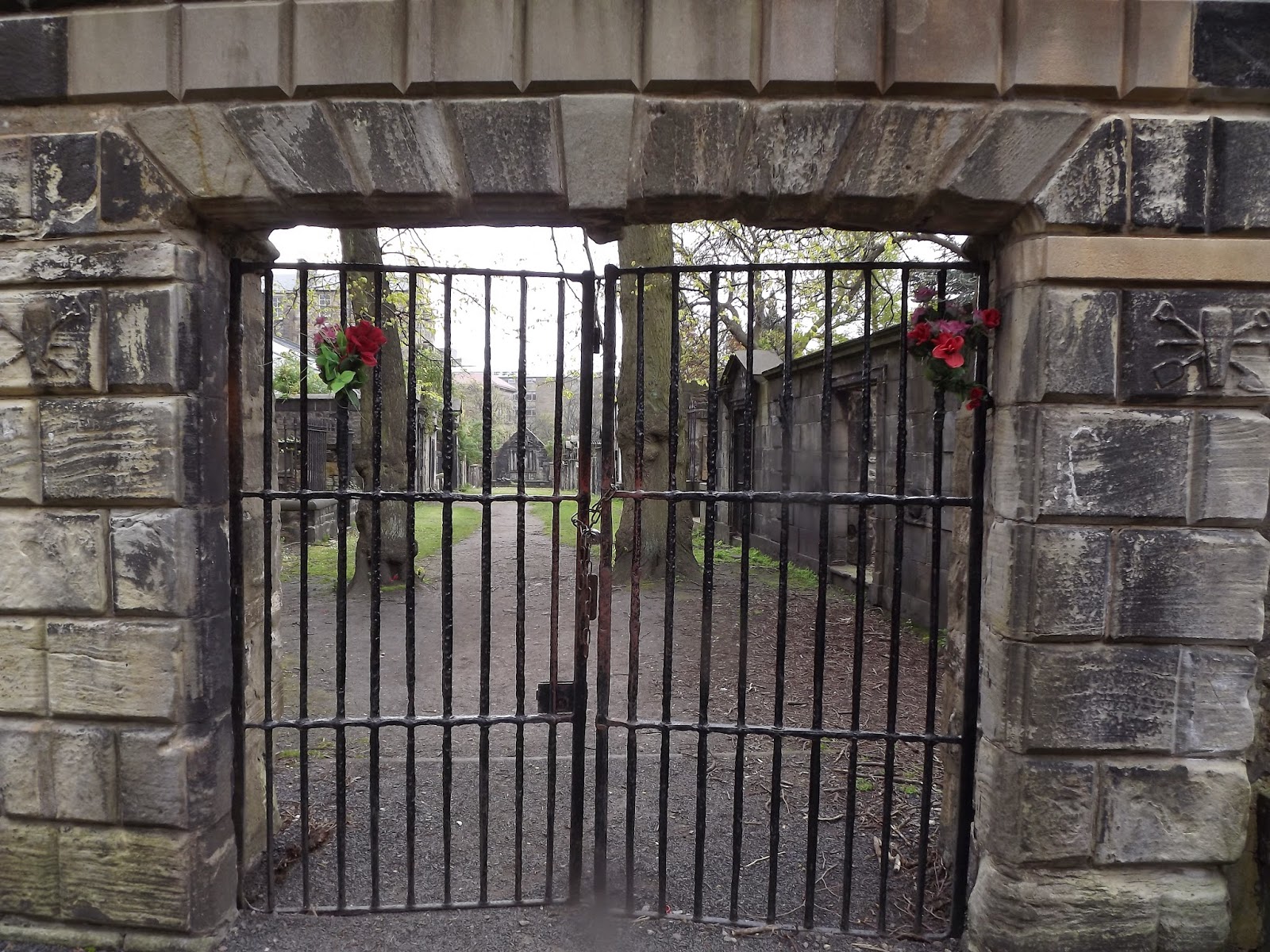 Here they were kept out in the open, exposed to the elements for the winter months. They were kept under guard by tyrant George "Bluidy" MacKenzie. 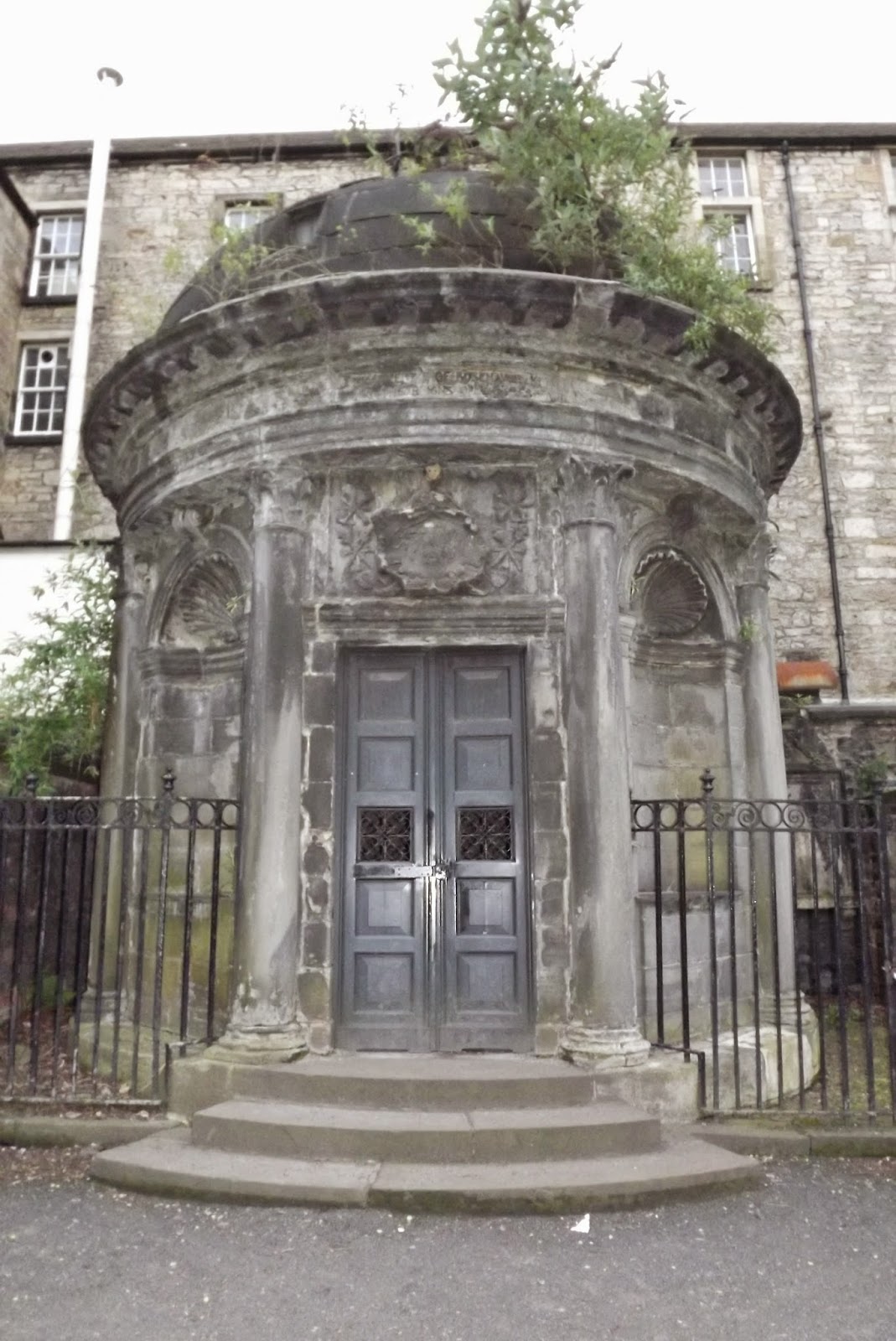 The prisoners were given 4 ounces of bread and water each day. Those that died under these conditions were buried in the part of the kirkyard reserved for criminals. Those that survived the winter were either executed come spring, or shipped off to as slaves.  Of those who were executed, some 100 were burned and their ashes buried under the Martyrs Memorial. 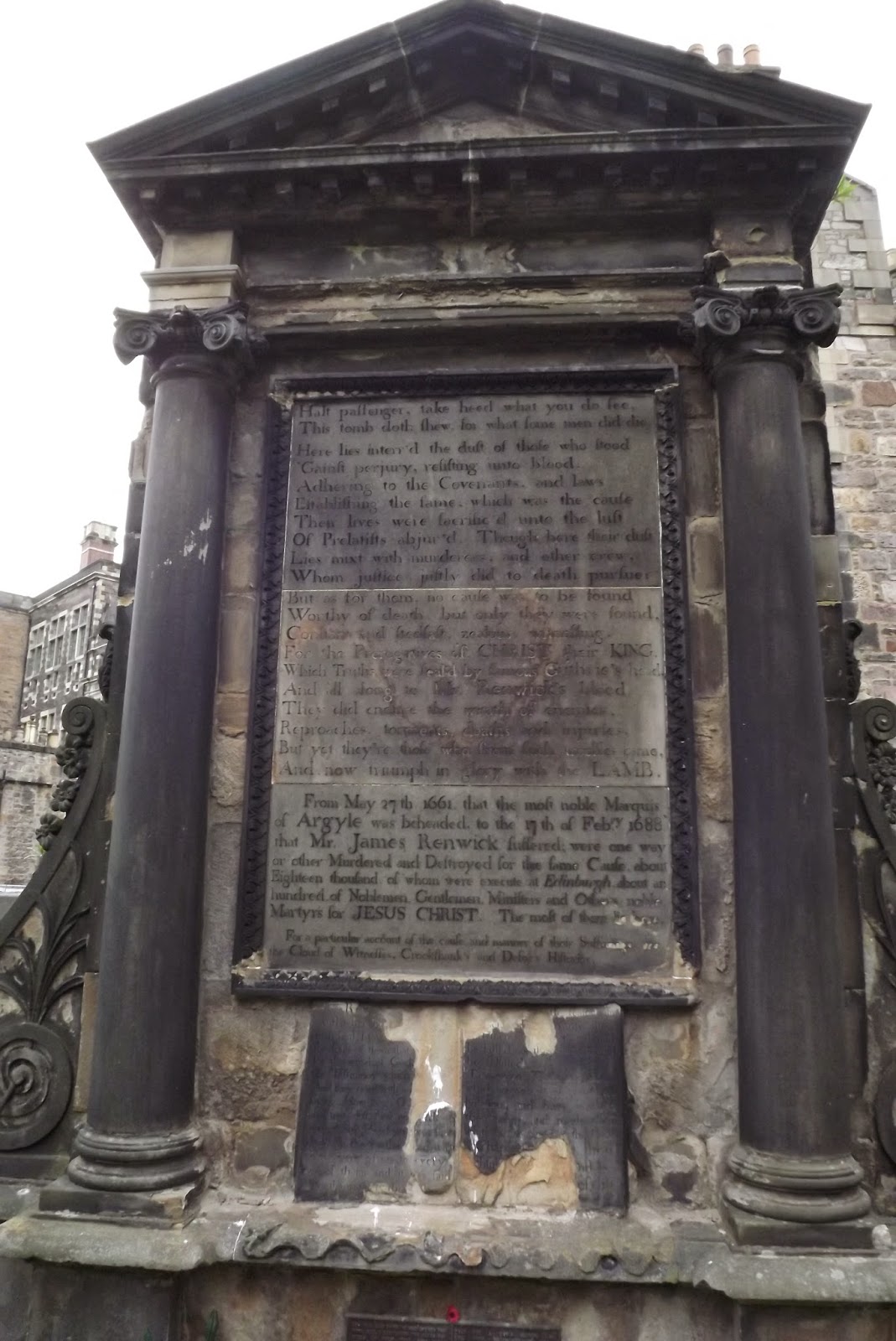 Although quite weathered, the inscription reads:
Halt passenger take heed what thou dost see
This tomb doth shew for what some men did die
Here lies interr'd the dust of these who stood
Gainst perjury resisting unto blood
Adhering to the Covenants and Laws
Establishing the same which was the Cause
Then their lives were sacrificed unto the Lust
Or Prelatist's abjur'd though here their dust
Lies mixt with murders and other crew
Whom justice did justly to death pursue
But as for this in them no cause was found
Worthy of death but only they were found
Constant and steadfast zealous witnessing
For the prerogatives of CHRIST their king
Which truths were feared by famous Guthrie's head
And all along to Mr Ranwick's blood
They did endure the wrath of enemies
Reproaches torments deaths and injuries
But yet they're these who from such troubles came
And now triumph in glory with the LAMB
From May 27th 1661 that the noble Marquess of Argyle suffered to the 17th of Febr 1688 that Mr James Ranwick suffr'd were executed at Edinburgh about an hundred of Noblemen Gentlemen Ministers & others noble martyrs for JESUS CHRIST. The most part of them lies here.
This Tomb was erected anno 1706.
If you have covenanter ancestors:
http://search.ancestry.ca/search/db.aspx?dbid=7021
Posted by Christine Woodcock at 20:12 No comments:

The April 2015 Genealogy Research Trip is Fully Booked. The itinerary is confirmed and can be viewed here:
http://genealogytoursofscotland.blogspot.ca/2014/10/april-2015-tour-itinerary-now-confirmed.html

Dates for the 2016 tour are set. The tour runs from May 30 - June 8. This tour is already starting to fill up. Spaces on these tours is limited to 15 researchers so that you get a better experience and to make the research in the archives more manageable for you.

If traveling to to conduct family history research is on your bucket list and 2016 is your year, don't wait to book or you may be disappointed.

Your tour fees include:

If you have unanswered questions: genealogytoursofscotland@gmail.com
Posted by Christine Woodcock at 16:35 No comments:

Sunday: This is a day of arrival. We will meet in the restaurant area of the hotel at 6:30 pm for a meet and greet and to talk about the week ahead. There will be an opportunity to sign up for optional walking tours of during the week.


Monday: Following breakfast, we will meet in the hotel lobby as a large group for 8:45. From here we will taxi to ScotlandsPeople Centre where we will enjoy a Family History session followed by research time.


Tuesday: Following breakfast we will again meet in the lobby of the hotel for 8:45. From here we will taxi to ScotlandsPeople Centre for a full day of research.


Wednesday: Following breakfast- we will meet in the hotel lobby as a large group at 9:45. From here we will taxi to the maps building of the National Library of Scotland.


Thursday: Following breakfast- we will meet in the hotel lobby as a large group at 9:30. From here we will walk over to the National Library of Scotland. You will require a library card. This will take time to process the group. At 10:30, we will enjoy a talk on the resources available at the library followed by a tour of the library. The rest of the day will be available for research. If you require a taxi to get to the NLS, one will be ordered for you.


Friday: This day is set aside for you to research in the local archives or Family History Society in the region where your ancestors lived. You may also choose to sightsee, shop or take a day trip instead.


Saturday: Following breakfast, we will meet as a large group in the lobby of the hotel for 6:45. From here we will taxi to where we will enjoy a full day of learning at the Scottish Association of Family History Societies conference. Those who have made plans to stay overnight in will be on their own to get to the hotel they have booked. The rest of the group will be taken back to the hotel in .


Sunday: This day is set aside for you to research in the local archives or Family History Society in the region where your ancestors lived. You may also choose to sightsee, shop or take a day trip instead.


Monday: Following breakfast, we will meet in the hotel lobby as a large group for 8:45. From here we will taxi to ScotlandsPeople Centre where we will enjoy our final day of research.


At 6:20pm, we will meet in the hotel lobby as a large group. From here we will taxi to Prestonfield where we will enjoy the Taste of Scotland Dinner and Show.
Tuesday: today is check-out day. I wish you safe travels as you return home with your newly found documents, stories and most of all, memories.
Posted by Christine Woodcock at 20:01 No comments:

National Records of Scotland have released the Consolidated Tax Schedules for 1798-1799. These are available on the ScotlandsPlaces  website.
From 1798 onwards taxpayers were no longer taxed individually for taxable items. Rather all of the taxes were consolidated into one payment.
Unfortunately, only the consolidated schedules counties which begin with the letters A-M survive. There are no schedules available for Nairnshire, Orkney, Peebles-shire, Perthshire, Renfrewshire, Ross-shire  and Wigtownshire.
Here's the link:
http://www.nrscotland.gov.uk/news/2014/consolidated-tax-schedules-released-online
Posted by Christine Woodcock at 07:38 No comments: