The Battle of Bothwell Brig (Bridge) was fought on June 22, 1679. The battle was part of the Covenanter Uprisings. There were about 6000 fighting on the side of the covenanters and 5000 government troops. While most on the side of the covenanters scattered, there are reports that up to 700 men died while another 1200 were captured and marched to Edinburgh. They were to be imprisoned at the Castle but they outnumbered the space available, so were placed in a makeshift prison on the south end of the Kirkyard at Greyfriar’s Kirk.

This prison was open to the elements and overseen by the notorious George “Bluidy” MacKenzie. Most were beaten, many were starved. Some 150 died from a combination of the abuse, starvation and exposure to the elements. They are buried in a mass grave in the Kirkyard and are honoured by a memorial known as the Martyr’s Memorial.

Some of the prisoners were freed after making submission. The 250 who remained imprisoned in Greyfriars were destined to be transported to Barbados. They were loaded onto the ship “Crown of London” at Leith to be sent to the colonies where they were to be indentured slaves on the plantations. The ship headed north, with it’s first scheduled stop to be Orkney. As is typical of the area in the late fall the winds were gale force and caused the ship to run aground just a few miles from Deerness. The chain of her anchor snapped. While the captain and crew managed to escape, the prisoners were not as lucky, since they had been in the hold. The captain had ordered the hatches battened down to ensure that the slaves were still on the ship when it landed in the colonies. He had planned to make some money by selling them to the plantation owners. One of the crew did manage to hack through the hatches before he left the ship, allowing about 45-50 men to escape. Some of the escaped men were eventually recaptured and later transported to New Jersey.

The remaining 200 men drowned when the ship went down off the coast of Deerness. Bodies washed ashore for many days and weeks.

There is a memorial at the edge of the cliff to mark the spot where the covenanter martyrs died tragically. Once again, we pulled up to the car park and found ourselves faced with a well worn footpath. While windy, the winds weren't gale force this time. The walk to the monument and back is 2 kms (a mile and a quarter) and primarily passes through a farmer's field. The monument is visible early on, but never seems to get closer. On the horizon was the sea, and what I thought was mist turned out to be some serious rain on its way to shore. 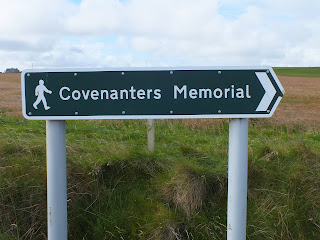 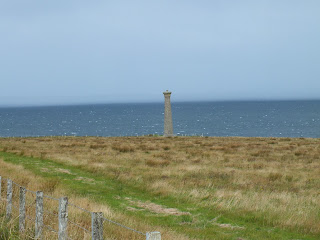 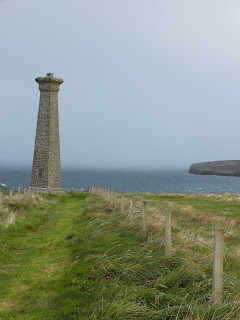 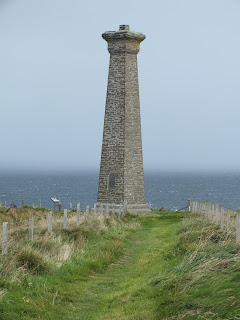 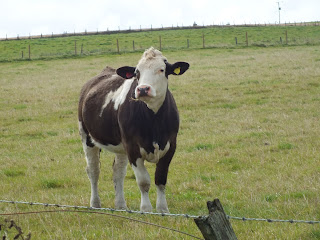 apparently tourists aren't a common sight for this cow

Finally, we made it to the monument. The winds had picked up and the drizzle had started. The sky looked ominous, so in the end it was a quick whip round the monument, taking as many photos as time would allow before we had to run for cover. Cover? Oh, the car we had left in the car park! Go, go, go! 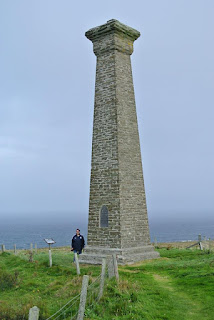 The monument itself is quite impressive at some 30 feet tall. One side of the monument holds a stone which reads:

“Erected by public subscription to the memory of 200 Covenanters who were taken prisoner at Bothwell Bridge, and sentenced to transportation for life, but who perished by shipwreck near this spot on 10th December 1679” 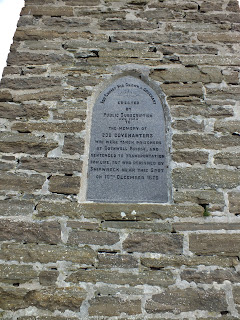 Posted by Christine Woodcock at 16:13