In 1826, a group of London based business men came together to form the Canada Company. The purpose of this conglomerate was, essentially, to sell parcels of land in what became known as the Huron Tract. The Huron Tract consisted of 2,484,000 acres of land in western Ontario, north of Lake Erie, south of Lake Huron and encompassing lands east of Lake St Clair. The Huron Tract covered parts of what are now Perth, Huron, Middlesex and Wellington Counties.
The Huron Tract  was managed by John Galt. Galt saw the Huron Tract as an agricultural settlement with the land owned by individual farmers. Settlers were attracted by the prospect of land. This land comprised some of the richest and most fertile farming country in Ontario. 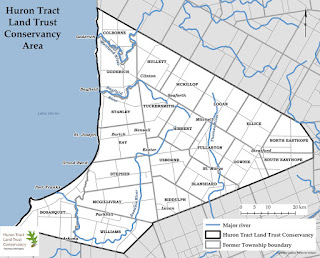