The crofters, living a subsistence life, no longer had the protection to meet their rents. The Lairds could no longer afford to forgive rent arrears. The move from crop farming to sheep farming was, largely, a financial decision but at the same time, the impact was to uproot and entire way of life. Most Lairds were quite benevolent and many, especially in the western isles, paid for passage for their tenant crofters to emigrate to the Americas where they had a chance to make a new life. Many also made arrangements for cheap land in the new world for their tenants and provided loans to make the new life a reality. Those who were cleared ended up doing very well. They were facing the opportunity to own land and to make better life for themselves and their families

Not so on the Sutherland Estate. The Sutherland Estate was the largest estate in the eastern highlands at some 1.5 million acres. The Duchess of Sutherland and her husband, the Marquess of Stafford hired Patrick Sellar as the Factor (manager) for their massive Estate.

Between 1811 and 1825, Sellars cleared some 15,000 people off the Estate. Rather than moving the crofters to a small plot of land on the coast where they could fish and harvest kelp, Sellar was brutal and ruthless in his methods of eviction. He tossed elderly and ill men, women and children out of their homes then set the croft roof alight. The roar of the fires frightened the cattle, sheep and dogs. The entire county was shrouded in smoke on a daily basis. 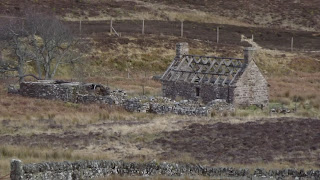 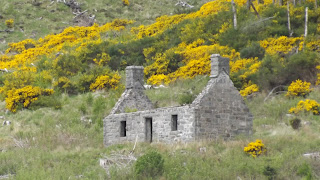 On 13 June 1814, Sellar evicted William Chisholm and his wife from their croft in Strathnaver. As was his habit, Sellar set the roof on fire. However, Chisolm's mother-in-law, Margaret MacKay, was still inside. Margaret was rescued by her daughter and taken to a nearby shed. Margaret died five days later. From this, Patrick Sellar was charged with arson and culpable homicide and put on trial in Inverness. He was acquitted of the charges. 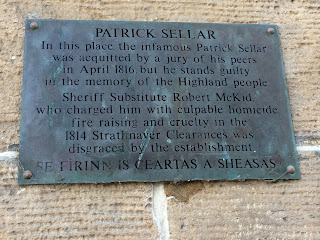 Sellars brutality was fueled by greed, He had his sights set on becoming a sheep farmer on the Sutherland Estate and he could almost taste the wealth awaiting him. 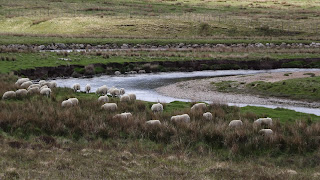 Posted by Christine Woodcock at 04:35