The Highland Tour was scheduled to coincide with commemoration services at Culloden Battlefield. The services are always held on the Saturday closest to the day of the battle, April 16, 1746.

As part of the commemoration event, a series of talks have been on offer. While the Highland Tour as not scheduled to begin until the evening of April 14th, everyone arrived on the 13th, so we have been enjoying some of the historic sights in the area. And Friday evening we arrived at Culloden to hear a talk called "The Gathering Storm" This was a talk out on the battlefield, and gave us an incredible insight into the days leading up to the day of the Battle. 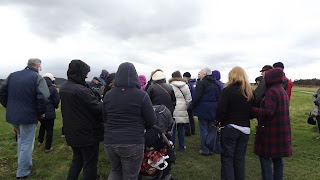 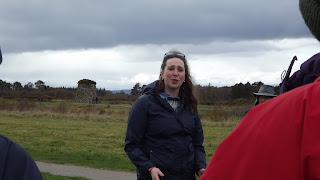 The weather was just as blustery and frigid as it would have been 271 years ago. The phrase "windswept moor" is an apt one!

On Saturday, April 15th, we arrived at the Moor in time to join the procession out to the memorial cairn. 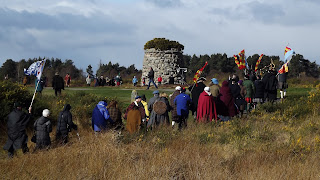 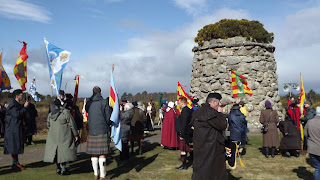 The service was quite moving and the hailstorm during the speeches led to the atmosphere of the day as that is likely the weather that the soldiers would have been battling in. 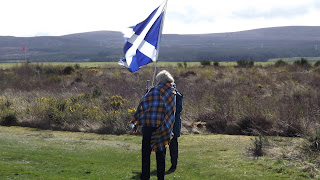 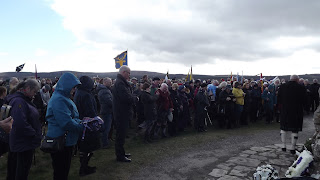 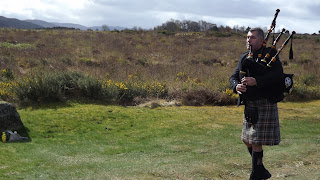 While for most there was a quick exodus back to the Visitor Centre following the service, a few of the clans toured the battlefield, paying homage at the areas associated with their fallen. This is a recessional parade leaving the Clan Donald Stones

In the early afternoon, we attended the talk Ïn the Shadow of the Princes" Here we were treated to three different perspectives of Highland life in relation to the battle.

The first speaker was Dr Kirsteen Mackenzie from the University of Aberdeen. The University had been gifted a personal diary of a joiner who lived through both the '15 and '45 uprisings and was able to give a first hand account of the economic impact of the risings on the wider population.

The second speaker was Professor Hugh Cheape who gave a brilliant talk on the Tartan and the fallout of the Act of Proscription. It was clear to see from the talk why so many Highland Scots were eager to emigrate to Canada where they could continue not only to wear their tartan but also speak their native tongue (gaelic).

The final speaker was Sarah Fraser. Sarah is the author of The Last Highlander and gave an absolutely brilliant talk on Simon Fraser Lovat and his demise. 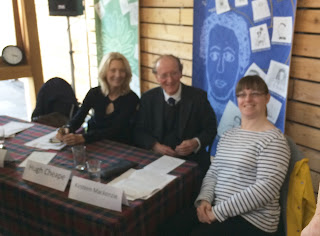 Posted by Christine Woodcock at 03:53