Monday night we had the opportunity to attend the meeting of the Scottish Genealogy Society. The speaker was Fran Woodrow, archivist at the John Gray Centre in East Lothian. Fran spoke about East Lothian's Poor. 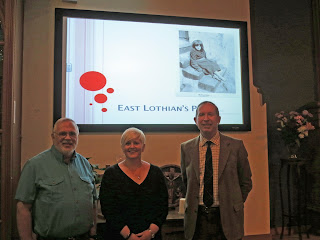 The purpose of poor relief was to suppress the nuisance of idle beggars in the parishes. Pre-1845 poor relief was the responsibility of the Kirk and the Heritors. There were different types of relief. These could include:
The monies used for poor relief were raised through the Heritors, Endowments, Legacies, Fines and Fees, Mort Cloth Rentals

Post 1845, the responsibility for the poor was transferred to the Burghs and Councils through the passing of the Poor Law Act. The Act established parochial boards in the parishes and towns, and ensured a central Board o Supervision (based in Edinburgh) which had the ability to raise taxes in order to cover the poor relief payments.

From a genealogical perspective, information can be found in a variety of sources, such as:
East Lothian is in the process of digitizing their Poor Law Records. They have a bank of 20 very dedicated volunteers. The rolls are being digitized for viewing onsite in the John Gray Centre. They are also being transcribed for offsite research inquiries and there is an in-house team that are indexing the minute books.

If you have ancestors from East Lothian and are wondering if they might have been involved with a poor law application, you can contact Fran.

The staff at the John Gray Centre, can do a free 15 minute search to let you know whether there are records relating to your ancestor which might be worth accessing. Any further research will be at a rate of £25.25 per hour.

Best of luck with your East Lothian genealogy research!

Posted by Christine Woodcock at 13:19