It is contest time once again. Everyone registered for the Summit by March 27 has the chance to win back their registration!

Breakfast on Saturday and Sunday and lunch on Saturday. No extra costs incurred.

All for just $119 cdn
Register NOW for the Great Canadian Genealogy Summit to be eligible to win back your registration fees!

Posted by Christine Woodcock at 06:00 No comments:

Yes! In the times of our ancestors, begging was a legitimate occupation! Thanks to an act of the Scottish Parliament, March  22, 1425 which declared:
"Also it is ordained that no beggar be suffered to thig or beg either in burghs or in the land between fourteen and seventy years of age, unless it is seen by the council of the town that they cannot make their living in other ways. And they that are so found shall have a token from the sheriff in the land, and from the aldermen and bailies in the burghs, and that under pain of burning on the cheek and banishing from the country."[1] 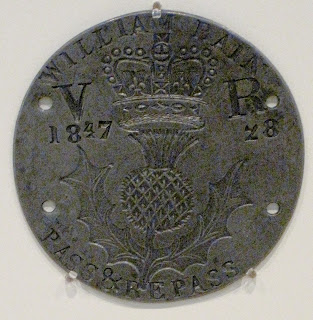 Photo by Ray Oaks (Own work) [CC BY-SA 3.0
(http://creativecommons.org/licenses/by-sa/3.0)]
via Wikimedia Commons
In essence, people who were found to be fit enough to work, but unable to find work, were given a token by the sheriff, bailies or alderman, which allowed them to legally beg for money. This meant that they could not be arrested or prosecuted for being a vagrant. It allowed the beggars the freedom to beg for money, wares or food and to do so without worry of retribution from the law enforcers of the day. Often, the tokens would have the name of the parish or burgh stamped on it. This showed the parish that was responsible for the beggar (and to where a body might need to be returned if anything untoward happened to him/her). The beggar could go anywhere within the burgh or parish stamped on their token, but could not be seen to beg in any other parish, or they could, in fact, be subject to arrest and prosecution.
Some tokens would state "Pass and Re-pass" which gave the beggar the freedom to freely wander from burgh to burgh (market town to market town) and to beg beyond the confines of their home parish/burgh.
Of note, is that the beggars HAD to be of able body and capable of work. This differentiated them from the elderly or infirm, who were more likely to require, and be in receipt of, poor relief either from the church or heritor (pre-1845) or from the burgh (post 1845).
If your ancestor is listed as a "beggar" in the Scottish documents, they you may be able to consult the local burgh archives to see if you can find out any more information and the particulars about how they were granted their beggar badge and given the right to beg for a living.
[1] The Records of the Parliaments of Scotland to 1707, K.M. Brown et al eds (St Andrews, 2007-2016), 1425/3/22.
Posted by Christine Woodcock at 21:17 No comments:

Chapbooks were the common reading material of our ancestors. Along with the Broadsides, the chapbooks provided the news of the day. From the NLS news release:

The chapbooks were primarily printed in Edinburgh and Glasgow, although there were smaller printers across Scotland. The NLS notes that 7 of their chapbooks, which were printed in Inverary, are in Gaelic. These chapbooks are songs.

You can access the chapbook collection here:
http://digital.nls.uk/chapbooks-printed-in-scotland/pageturner.cfm?id=104184103
Posted by Christine Woodcock at 07:30 No comments:

And that's a wrap! Incredibly in just a fortnight, the Glasgow Genealogy Research Tour has SOLD OUT!

Thank you to everyone who signed up! I am looking forward to sharing your genealogy adventures with you in Glasgow!

For anyone still interested in researching their family history in Scotland, the regular Genealogy Tour that takes place annually in Edinburgh is still OPEN.

The Edinburgh tour gives you:

Posted by Christine Woodcock at 07:39 No comments:

After a whirlwind fortnight, the Glasgow Research Tour is almost SOLD OUT. There is, remarkably, only ONE SPACE LEFT!

The week of research will take place in Glasgow and will focus on research in the repositories there.

Anyone interested in the Glasgow week might wish to register for the April 2/16 webinar presented by Dr Irene O'Brien, head archivist at the Glasgow Archives: https://scottishsig.ogs.on.ca/webinars/

To register for the Special Research Week in Glasgow:
http://www.genealogytoursofscotland.ca/glasgow-week-tour.html 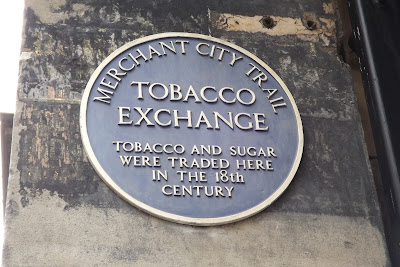 *Airfare and transfer between hotel and airport not included*
Posted by Christine Woodcock at 19:23 No comments:

FREE ACCESS TO IRISH RECORDS ON FIND MY PAST

Find My Past is releasing the Irish Catholic Parish Registers. These registers span over 200 years (1671-1900) and cover over 1000 parishes for both Northern Ireland and the Irish Republic.
"This is the first time that National Library of Ireland’s collection of Irish Catholic Registers has been fully indexed with images to the original documents linked online. The records can now be searched by name, year and place, allowing relatives and historians the opportunity to make all important links between generations with the baptism records and between families with the marriage registers."
And to celebrate the release, Find My Past is opening access to all of their Irish records for FREE from March 1 - March 8!
What are you waiting for?? Start searching at Find My Past
Posted by Christine Woodcock at 09:00 No comments: