Can't Find Them in the Census?

One of the best tools for a genealogist is the census. This lets us know where our ancestors were, their approximate age, occupations and who the family was comprised. From there we can go back and look for birth or marriage certificates. But sometimes our ancestors elude us on the census records, or we might be wanting to find them before the 1841 census. What then? The OPRs have scant information but are a useful tool as well. If these records don't produce results, have a look at the Post Office Directories, now available through the National Library of Scotland (NLS).

From here, you can click on the area where your ancestors resided and start scouting them out!

Happy Searching!
Posted by Christine Woodcock at 08:08 No comments:

Scottish GENES (GEnealogy News and EventS): 1911 English and Welsh census on Ancestry: "Ancestry ( www.ancestry.co.uk ) has uploaded the 1911 census images for England and Wales, the Channel Islands and the Isle of Man. However ..."
Posted by Christine Woodcock at 18:15 No comments:

With the popularity of the television show Who Do You Think You Are, more people are showing an interest in finding their roots. I am a genealogist, living in Ontario, with an expert in Scottish genealogy research. I offer 10 day trips to Scotland to allow people to access the records directly (as opposed to paying for services of a professional genealogist). I take groups to the repositories in Edinburgh (Scotland's People Centre, The Scottish Genealogy Society, The National Library of Scotland) and in Glasgow (The Mitchell Library - the largest Library in Europe with one full floor dedicated to genealogy research and now a second floor which houses the Genealogy Centre - a repository with full access to all of the records). In addition, I arrange speakers to help those in the tour better understand their scottish research and scottish ancestry. Being from Scotland, I think it is really important for those of British Heritage to gain a greater understanding of who they are as a person. As such, I take the groups to The Scottish Experience Dinner Show and arrange a full Scottish Banquet in a small country castle on the outskirts of Edinburgh for the final night. There is time for people to travel to the part of Scotland where their ancestors lived. This is not included in the tour price, but I will make all of the arrangements for the individuals as requested.
Groups of 5 or more qualify for a $100 per person discount.

My newsletter and brochure can be viewed from my website: www.genealogytoursofscotland.ca
Posted by Christine Woodcock at 15:10 No comments:

Email ThisBlogThis!Share to TwitterShare to FacebookShare to Pinterest
Labels: scottish genealogy, specialty vacations, travel scotland, who do you think you are

Well the 1911 census for Scotland is finally available. Have heard lots of horror stories of people having a hard time finding their ancestors because of the way the search is set up. However, I decided to give it a try.
We know that Harry married Sarah Costello in 1913 and Granny Mack married Geordie in 1912, so I figured it shouldn’t be too hard to find where they were staying in 1911. I was right. They were in a miners row known as Bothwellshields. First I have ever seen
reference to it. It is in the district of Shotts.
Interestingly all 4 sons were reported as being at home, however, when Harry was 8, he was listed as being home as well, although in reality he was with his uncle, where he also shows on the 1901 census. I guess Granny Mack wanted to ensure he was counted!
What I didn't expect to find on the 1911 census was that Granny & Geordie were residing together, listed as man and wife AND the two claim to have been married for 6 years! The old scoundrels!! 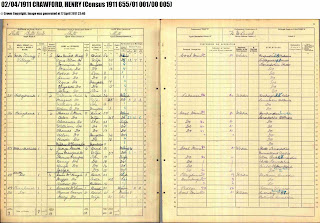 Posted by Christine Woodcock at 20:10 No comments:

An interesting new site for anyone with Welsh ancestors is The People’s Collection Wales (Casgliad y Werin Cymru). This is a “place to discover and learn, contribute your own content and share the story of your with the world”. The website is a new online archive where you can do a variety of things of interest to genealogists such as exploring historic maps of , creating and sharing family trees, join special interest groups, learn about Welsh history and more. This is a free site, but in order to contribute your own stories or information, you will need to register with the site (registration is also free). http://www.peoplescollectionwales.com/
Posted by Christine Woodcock at 08:04 No comments:

So Many New Resources for Irish Research

With the opening of the new PRONI centre in , there has been a great deal of activity in digitizing and making accessible, items of interest to those searching Irish ancestors. The PRONI centre allows onsite access to Irish records in much the same fashion as the Scotlands People Centre in at Register House.  There has never been a better time to be researching your Irish roots. Here is a list of what is available online – most of it FREE:
Thousands of eyewitness accounts from the bloody Catholic uprising of 1641 have been transcribed and put online for the first time. The uprising ultimately resulted in half the land owned by Irish Catholics being confiscated and given to Protestants from . This land redistribution, based on some 5,000 sworn statements given by the eyewitnesses, make this free collection a valuable resource for genealogists. Here’s the link: http://www.1641.tcd.ie/index.php
The Irish Newspaper Archives has expanded their list of newspapers that can now be searched for free. There is a cost to view the actual article. http://www.irishnewsarchive.com/Default/Skins/SEARCH/Client.asp?Skin=SEARCH&enter=true&AppName=2&AW=1304766319516
in has added burial records that go back as far as 1828, which predates the official opening of the cemetery in 1832. Officially known as , it is the largest nondenominational cemetery in and contains an estimated 1.2 million burials. Both Protestant and Catholics are buried in this cemetery and this record set is an excellent place to look if you have ancestors from . Have a look: http://www.glasnevintrust.ie/genealogy/
The website Irish Genealogy continues to add more Catholic church records to their website. The most recent update includes church records for , Carlow, and Kerry. http://churchrecords.irishgenealogy.ie/churchrecords/
Genealogy also allows you to search through historic Irish Pension Records by surname. These records predate the 1901 Irish census. Although these records are currently held at the Public Records Office of Northern Ireland, many of these records are not indexed by surname. Thus, this website can save you time and effort. There is no cost to search but there is a fee to see the full record  http://www.ireland-genealogy.com/
The Guinness Brewery in has digitized historical employee records from the brewery spanning the period from 1759 to the present. Some 20,000 individual employee files have gone online, which represents about 80% of all employees who worked at the historic brewery. A typical file lists the employee’s name, date of birth, date of death, employee ID number, date joined the brewery, date left, occupation and department that the employee worked: http://www.guinness-storehouse.com/en/GenealogySearch.aspx
Here’s what’s new at PRONI:
The Heritage Council of Ireland has launched a major new web portal called the Irish Archives Resource. It allows researchers to locate archival collections in that are relevant to their research. A detailed listing is provided for each collection along with instructions on how to access the collection. Many of the major city and county archives in have already contributed to the website. This site looks like it will quickly become a must-stop for Irish genealogy researchers: http://www.iar.ie/
Belfast City Council has digitized 360,000 burial records from three city cemeteries:   , and . Each record contains the following information: full name, age, sex, last place of residence, date of death, date of burial, grave section and number and type of burial.  http://www.belfastcity.gov.uk/burialrecords/index.asp
Queen’s University in Belfast has created a virtual library on the history of Irish migration. The Irish Emigration database contains more than 33,000 records from various sources, including letters, diaries and newspaper ads. The Voices of Migration and Return database contains 90 life interviews conducted with migrants from the region. http://www.dippam.ac.uk/
FindMyPast Ireland has recently launched. Searchable records include land and estate records, ’s Valuation of Ireland, directories, military and rebellion records, migration records and wills that go back as far as the 13th century. Here is just a sampling of what can be found on this subscription based site:
Marriages, Deaths, Wills (The Index of Irish Wills (1484-1858), Will and Grant Books Index (1270-1858), Philimore & Thrift Idexes of Irish Wills (1536-1858)
Sir Arthur Vicars Index to the Prerogative Wills of (1536-1858).
Census substitutes such as the ’s Valuation, Tithe Defaulters of 1831 and the
Census of Elphin 1761
Treble Almanack & Dublin Directory 1783
City of and Hibernian Provincial Directory 1824
Thom's Irish Almanac & Official Directory 1884
Bassett's The Book of Antrim (1888)
The William Smith O'Brien Petition 1848-49
1798 Claimants and Surrenders
's Memorial Record: World War 1: 1914-1918
Posted by Christine Woodcock at 07:59 1 comment: