Nova Scotia has a long historic link with Scotland, and not only in name. As early as 1624, King James I (King James VI of England) offered a number of baronetcies to his loyal landowners. These land grants were in what is now Nova Scotia. In order to fulfill the qualifications of receiving crown land, the receiver was to stand on his plot of land and declare allegiance to the King. The distance involved called for some creativity and so King James VI & I declared a portion of Edinburgh Castle as “Nova Scotia” so that the potential landowners could stand on this “portion of Nova Scotia” and declare their allegiance without having to travel to the Americas. On the wall, just outside the main gate of the Castle, is this sign: 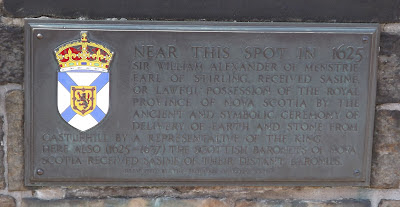 The sign reads: “Near this spot in 1625 Sir William Alexander of Menstrie Earl of Stirling received sasine or lawful possession of the Royal Province of Nova Scotia by the ancient and symbolic ceremony of delivery of earth and stone from Castlehill by a representative of the King. Here also, the Scottish Baronets of Nova Scotia received sasine of their distant baronies.”
Of course at this time in history, Nova Scotia incorporated parts of southern and eastern Maine as well as lower and western New Brunswick, especially along the Fundy Coast.

Posted by Christine Woodcock at 18:38