I only ever knew my paternal grandmother by her name "Maggie Haddow." Maggie died when I was 18 months old. I never really knew her, but I knew all about her and I fell in love with her name. "Maggie Haddow" always sounded important to me. Someone wordly. I remember thinking Maggie Haddow's name should be on a building. Have a lasting legacy. Something permanent to honour her name. Maggie Haddow.

Certainly the stories I heard from my dad, and even from my mum, who knew her briefly, didn't quite fit with the image that I had ascribed to her name. 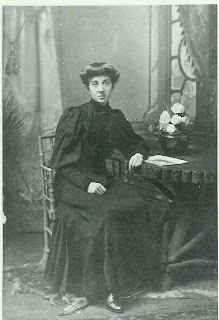 Maggie was a teacher. My dad always thought teachers had some sort of built in radar. He would skip school and go to play in the river. Although he would return home with his siblings at the end of the school day, Maggie would instantly know he had skipped school. Dad was convinced there was some sort of "teacher intelligence program" that had informed her of his waywardness. Some sort of gossip chain that ran through the village - teacher to teacher (this in the days before phones were commonplace). It wasn't until years later that his mum told him how she knew. Being a small boy, he was oblivious to the fact that the carpet factory run off ran into the same river. So, if the carpets were being dyed blue that week, he came home with a blue tinge to his skin. If the carpets were being dyed orange, he came home jaundiced.
Maggie gave up teaching full time once she had a family. She then turned to teaching Sunday School. 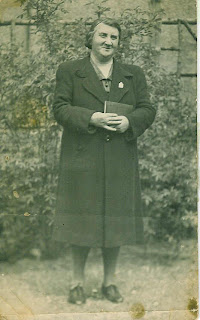 All of Maggie's children were musical and the family gathered on Friday or Saturday nights for their own ceilidh. Others in the extended family or neighbours from the street would all gather for a night of music and laughter.

It wasn't until I started doing family history that I learned more about Maggie. Maggie was the daughter of Walter Haddow and Mary McCabe. This is where the real challenge of the Scottish Naming Pattern first came to light. Almost every generation back, we descend from a Walter Haddow (never the brother!) Fortunately their wives did not share the same names as each other.
Walter and Maggie had 6 daughters. Maggie was the second eldest. My cousin, on a trip to Scotland, managed to find this photo: 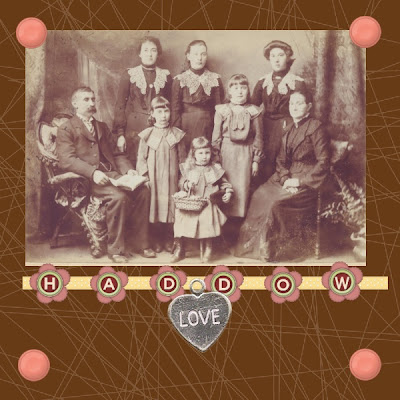 Seated are Walter on the left and his wife Mary on the right. Maggie is standing behind her mother. The other girls are: (Left to right)  Elizabeth & Mary in the back row; Jeannie & Kate in the middle row and an unknown little girl holding a basket. I always wondered about that little girl. I could never place her with any of the family. Never that is until the 1911 census became available. I am of the belief that this photo was taken just prior to Maggie's wedding to my grandfather, Archie. Maggie's eldest sister, Jessie is absent from the photo.

Earlier this year, I went looking for my dad's eldest sister's birth certificate. Mary was born in 1910 - two years before Maggie & Archie married. Not terribly astounding back then.

I had a difficult time finding my aunt Mary's birth certificate. She was not listed in Tarbrax where I knew my grandparents were living in the early part of their marriage. Nor was she listed living in Kirknewton where I knew Maggie Haddow had been raised. Stumped. So, I decided that rather than waste credits on Scotland's people, I would use them for the 1911 census records. 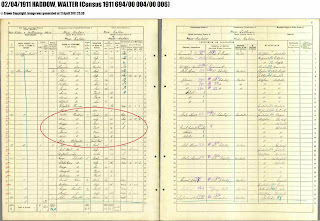 Jackpot! There on the last line was my aunt Mary: Mary McDonald, granddaughter, aged 1
I then went back to the birth records. I knew from previous searches that she was not listed in Kirknewton as Mary McDonald, but when I searched for Mary Haddow, I found her: 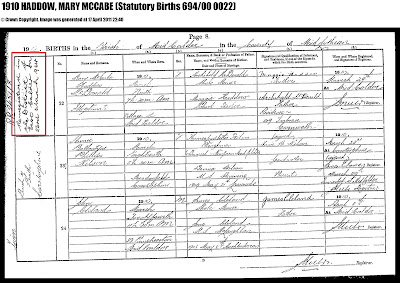 Mary was known as Mary McDonald all her life. My grandfather is listed on her birth registration as her father, yet her birth was registered under the maiden name of her mother because the couple were not as yet married. Suddenly, I realized that Mary is the young girl holding the basket in the family photo above. She would have been 18 months of age when her parents married.
Further inspection of the birth register shows an interesting find in the box on the left hand side of the ledger. It reads: "﻿Re-registered in the District of East Calder on 23rd March, 1964." This would have coincided with Mary's first trip to Canada to visit with us and she would have needed a passport. She would have needed a birth certificate to get her passport. And her birth was originally registered, not as McDonald, but as Haddow. It is also quite likely that until she received her birth certificate (in order to apply for her passport) she was unaware that her birth had not been registered as McDonald. Mary kept the name Haddow as a second middle name.
Posted by Christine Woodcock at 22:55